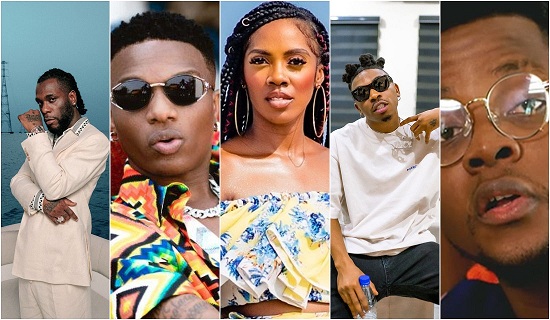 The emerging trend of Afrobeats on the global stage is a testimony that the hard work of Nigerian musicians is gradually paying off. In whatever genre, and particularly Afrobeats, Nigerians have served hits in 2021.

Afrobeat is a unique type of sound that is a mix of African sound, soul and jazz music. It is popular among Nigerians but in recent times, has become an acceptable genre in the whole African continent, Europe and even America. Afro Beat has categories such as juju music, Afro Pop, Dance Hall, High Life, Afro Soul etc. These categories rely heavily on indigenous African instruments.

Accolades have been widely given to Fela Aníkulákpó Kuti for toeing the pathway for musicians of this generation. It is this pathway that Wizkid, Burna Boy, Davido and others have followed to attain global limelight and recognition. 2021 has been a great year as it serves Nigerians and the world with different Afro songs. The first quarter of the year featured the following sensational hits, as curated by TrendyBeatz:

Highway by Dj Kaywise ft Phyno: Released in December 2020, the song was perfect to kick off the new year with. It was produced by a fast-rising producer, Yung Willis. This song maintained predominance throughout January, especially, as it remained top spot in the MTV Official Naija Top Ten for over eight weeks at the beginning of the year.

Dimension by JAE5 ft Skepta and Rema: With Ghanaian origin but based in London, JAE5 was the brain behind Dimension. He featured BET Award-winning Skepta and young talented Nigerian artist, Rema. Rema received positive reviews on his improved lyrics in the song. Dimension was number one in an incredible ten-week run in the UK’s Official Afrobeats Chart.

Away by Ayra Starr: Ayra Starr is one of the biggest revelations of 2021. She was discovered and signed
Mavin Records boss, Don Jazzy. Away is one of the songs in her debut EP titled “Ayra Starr” released in2021. Away’s three-minute video has over three million views on YouTube, making her the youngest female Nigerian artist to achieve such a feat.

Feelings by Ladipoe ft Buju: Feelings is a song that is loved by everyone, perhaps, because it is a mood
lightener when in distress. Also, its lyrics were written in the simplest form. This makes it easy for everyone to sing along. Ladipoe showcased his ability to manoeuvre trap rap while Buju complemented the song with his melodious voice. This song made headway in radio waves across Nigeria. It remains one of the most loved songs of the year.

Rock by Olamide: After his “Carpe Dem” album in 2020, Olamide decided to increase his firepower in 2021 and obviously, Rock paid off. The YBNL boss is popular for street anthems. This time, he decided to do something mild, technical and unique. Rock showed Badoo's masterclass and was outstanding as the most streamed song in Nigeria in June 2021.

Soundgasm by Rema: Rema is one young artist making headlines. He is skillfully talented and has an appealing voice. Winning the next rated artist in 2019 shifted expectations towards him. Soundgasm is his biggest single in 2021. The song has an amazing 24 million views on YouTube and still counting.

Coming by Naira Marley ft Busiswa: Coming is a perfect description of a hit song. Aside from its explicit diction, Naira Marley fused perfectly with Capetown born Busiswa. Naira Marley won his first Sound City Award in 2020. Already, Coming has over 34 million streams on Audiomack, making it one of the most-streamed songs on the platform.

The second quarter of the year is notable for blockbusters in the Nigerian music industry. This period has and still is, witnessing an eclipse of high profile hits.

Essence (Remix) by Wizkid ft Tems & Justin Bieber: Again, Wizkid proved to be one of the biggest artists Nigeria has ever produced. Essence was part of his Made in Lagos Project released during the COVID-19 lockdown. It was until 2021 that the song reached its peak. With over 50 million views on YouTube and global acceptance of the original track, Starboy went further to make a remix with Justin Bieber. The song has various remixes by different artists as well as covers.

SIP (Alcohol) by Joeboy: Alcohol is one big hit by Joeboy in 2021. The 24-year-old Pawa Africa signee came into the frontline after his debut ‘Baby’ in 2019. For over SIP has maintained the Top 10 stop in various streaming platforms across Nigeria, including Spotify. The Sound City 2020 MVP winner is a fan favourite this song represents his flows.

Bloody Samaritan by Ayra Starr: Just 19, Ayra Starr is one of the rookies of 2021. Her energy and vibe were exemplified in this track. It was released as part of her “19 And Dangerous” Album in July 2021. The song was produced by London and peaked at 15 in Afrobeats Singles Chart in the UK. The song is loved by its lyrical composure and has drawn comparisons between Ayra and Tems. Bloody Samaritan has fascinating vocals and is widely appreciated.

Peru by Fireboy DML: Fireboy has acclaimed that Peru wasn’t planned for but was initially a freestyle. However, this freestyle has gone to top the Afrobeats UK Chart for four weeks in a row. This landmark set a new record.

Monalisa by Sarz ft Lojay: The story behind this hit single is that of time and coincidence. Award-winning producer, Sarz, is known for his masterpiece in musical production. They linked up through Lojay’s lawyer. This link led to the production of Lojay’s EP, LV N ATTN (Love and attention). Monalisa has increased Lojay’s fan base. It is the most streamed Afro song on Shazam.

This year has been responsible for turning the global music torchlight on Nigerian artists like Tems, Ayra Starr and Buju. Tems even got to feature in Drake’s album, Certified LoverBoy. Just recently Wizkid, Burna Boy and Segun Kuti got Grammy nominations. In addition, Nigerians have claimed several awards in different categories in this year’s MOBO Award, Soul Train Award, BET Awards and still counting.