MONSTA X On Achieving Their Most Music Show Wins Yet With “Rush Hour,” Their Upcoming Film And English Album, And More

MONSTA X recently spoke about successfully wrapping up their “No Limit” promotions, their upcoming English-language album, and more!

On November 19, MONSTA X released their 10th mini album “No Limit” along with their title track “Rush Hour,” which has gone on to win No. 1 on a total of five music shows. The album also topped Hanteo’s weekly album chart, as well as both Gaon’s weekly and retail album charts. as well as placing third on Billboard’s Hot Trending Songs realtime chart.

Regarding the conclusion of their promotions, Minhyuk commented, “Honestly, I don’t think our two-week promotion period is long. It feels like these promotions went by especially fast, so I think our fans are a bit regretful, and we feel the same way. That’s why throughout our promotions, we did our best to showcase a wide variety of things, more so than usual. As regretful as it is, I promise we’ll return with even better things. I described this album as an overflowing bowl of rice, and I’m thankful to Monbebe [MONSTA X’s official fan club] for not letting that heat cool down. We were able to successfully complete these promotions as well because we had Monbebe.”

I.M added, “At the time of release, I thought, ‘In the blink of an eye, we’ve become singers who are already releasing their 10th mini album,’ so I said that I thought it’d be a very special album, and it really has been. I want to say thank you for recognizing our unending growth. We will work hard to continuously greet you with special albums.”

With five music show wins, “Rush Hour” is now the MONSTA X title track that has won the most trophies. Joohoney shared, “While promoting as MONSTA X, we had four music show wins with ‘Alligator,’ but it’s our first time winning five times. When I heard the news, I was stunned because I couldn’t believe it. Something I realized through these promotions is that we’ve overcome all the moments when we wanted to give up, and if we’re with Monbebe, there’s nothing we can’t overcome. It’s an emotion you can’t describe with words. I hope the feelings I can’t fully express are conveyed to our fans.”

Starting December 13, MONSTA X will be joining the iHeartRadio Jingle Ball tour for the third time. Hyungwon commented, “When we first joined the Jingle Ball tour in 2018, we started to become associated with the keyword ‘first K-pop group.’ While we were so thankful for and proud of that keyword, it also felt like we had become representatives of K-pop, so it was very nerve-racking and we honestly felt a lot of pressure. We went into it thinking that we should not put on a performance we would regret, so our two Jingle Ball tours remain unforgettable memories for us. They were also part of the foundation of MONSTA X’s growth. We’ve prepared a performance that’ll make you want to see more of us, so I hope you give us lots of support.”

I.M shared, “After the start of COVID-19, this is the first time in nearly two years that we’re performing overseas. Although it’s our third Jingle Ball tour, it feels new because we’ve been longing to perform at concerts for so long, and I’m also nervous. I’m also thankful and honored to have been invited to participate once more. As K-pop is receiving love globally, I’ll make sure we return after showcasing our coolest side and only showing ourselves doing well.”

Right after the tour are two exciting ventures for the group. Regarding the first one, Kihyun explained, “The first thing that’s approaching is the film ‘MONSTA X: The Dreaming,’ which captures MONSTA X’s most honest image and premieres on December 8. I heard that all the special pre-release screening events were sold out, but our movie is content that we prepared really diligently and that our fans won’t be able to help but love. I’m confident that it’ll be a viewing you won’t regret. I hope it will become a nice gift for our Monbebe overseas whom we haven’t been able to meet due to a variety of circumstances.”

Kihyun added, “Following the Jingle Ball tour, we’re also scheduled for a world tour in 2022 starting in New York and moving to Toronto, Chicago, and more. We’ll greet you soon with the best performances.”

The second venture is MONSTA X’s second full-length English-language album “The Dreaming,” which will be released on December 10.

Joohoney elaborated, “Since it’s jam-packed with 10 songs, I think it’ll be lots of fun to listen to. Our first full English-language album ‘All About Luv‘ received so much love from both domestic and overseas fans, to the point where people often told us that it was an amazing album. This is an album that we thought a lot about because we didn’t want to let them down. We know that [our fans] always tell us we’re doing well and are the best, but we wanted to show a result that lives up to that. It’s an album that fully captures MONSTA X’s genre and musicality, so I hope Monbebes and all listeners listen carefully.” 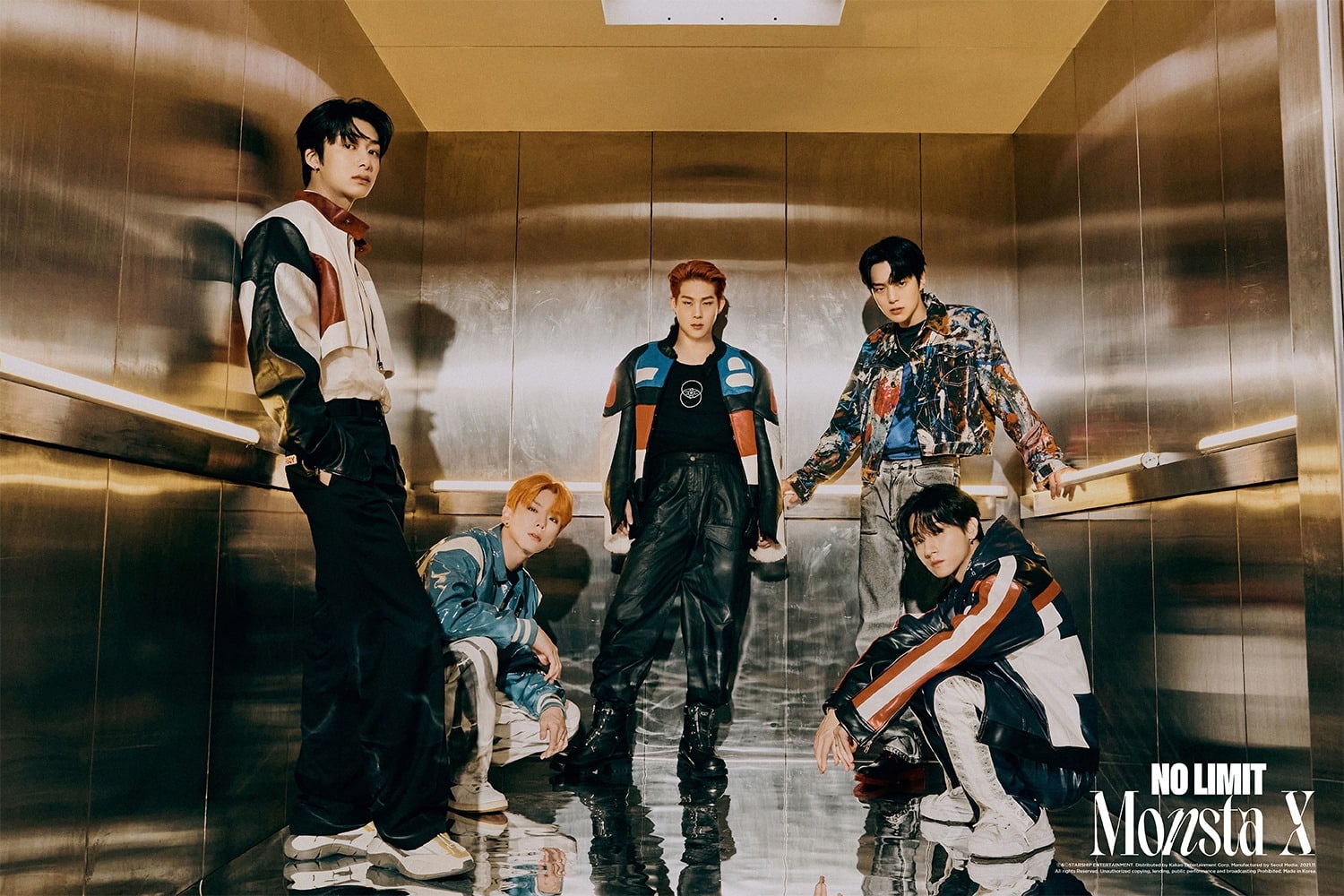 Lastly, each member shared a message to their fans. Minhyuk commented, “I always feel this way, but I wonder whether I’m allowed to receive this much love. The love that Monbebe sends is always passionate, and I hope they know that it keeps me from getting exhausted. We’ll become a group that Monbebe will never be embarrassed of, so please watch over us.”

Kihyun shared, “I want to say that we will return healthy and unharmed, so please don’t worry too much. Please know that no matter where we are, we are always with Monbebe. I promise to show a good image for our December promotions, as well as in 2022.”

Hyungwon commented, “Thank you for always supporting us so that we can confidently step on stage. We still have a lot of unreleased content and have prepared a variety of promotions, so I hope you aren’t feeling too regretful. Because we prepared it for all Monbebes. I hope our fans like it.”

Joohoney continued, “We’ve already reached the start of December and the end of the year. Although I can’t believe that we’re in the seventh year of our time together, in my memories that flash by like streetlights, there isn’t a single time where there wasn’t Monbebe. In the future, I want to spend even more time together, and I want to ask that you please take good care of me. I love you, Monbebe.”

I.M commented, “I think ‘Autobahn’ represents my feelings well. I will love you like an autobahn road with no speed limit. The days have become much colder, so please be careful not to catch a cold, and let’s meet again in good health.”

Start watching Hyungwon in his drama “Fly Again” below!