SEVENTEEN Dishes On Stage Names They Almost Had, Hanging Out With Each Other’s Parents, And More On “Ask Us Anything” 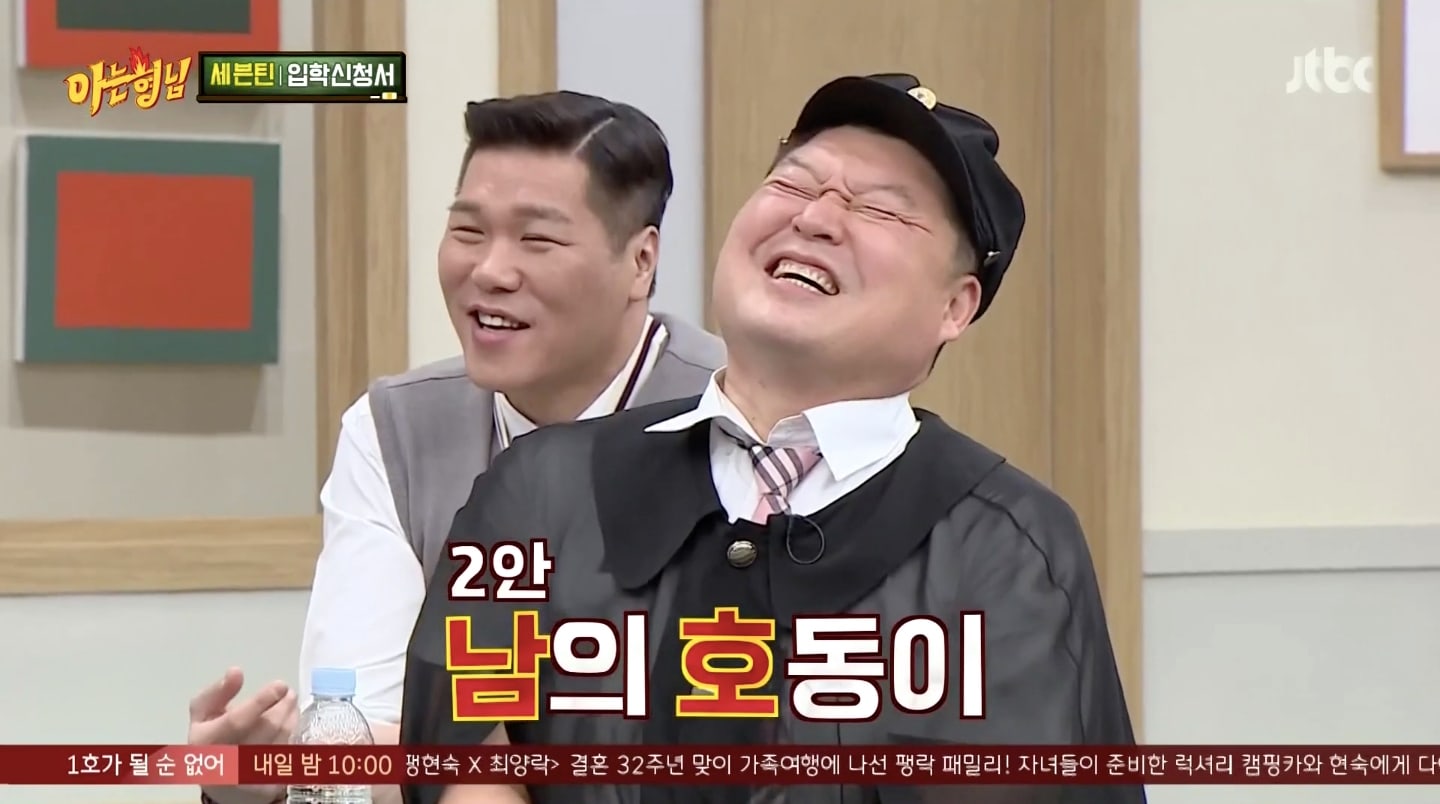 SEVENTEEN had the entire cast in stitches throughout their latest appearance on “Ask Us Anything”!

On the October 24 episode of the popular JTBC variety show, all 13 members of SEVENTEEN appeared as guests. While reintroducing themselves as “transfer students” (in keeping with the show’s premise), the SEVENTEEN members explained the meanings behind their stage names for the sake of the “Ask Us Anything” cast.

When Woozi explained that his real name was Jihoon and that his stage name was an abbreviation for “Our Jihoonie,” Super Junior‘s Kim Heechul jokingly remarked, “You can tell from the nickname ‘Our Jihoonie’ that the company atmosphere is really warm. Kang Ho Dong‘s nickname, [on the other hand,] should be ‘Your Ho Dong.’”

The SEVENTEEN members then went on to tell the story of how Mingyu, DK, and The8 had almost used each other’s stage names.

When the cast asked how those names were connected, DK explained, “‘Yong Pal’ meant the powerful vocals of eight dragons, and that later became The8 [pronounced ‘D8’ in Korean]. Meaning Dragon Eight.”

“But Mingyu ended up using his given name,” he continued, “so I wound up using Dokyeom, which was originally supposed to be for Mingyu.” 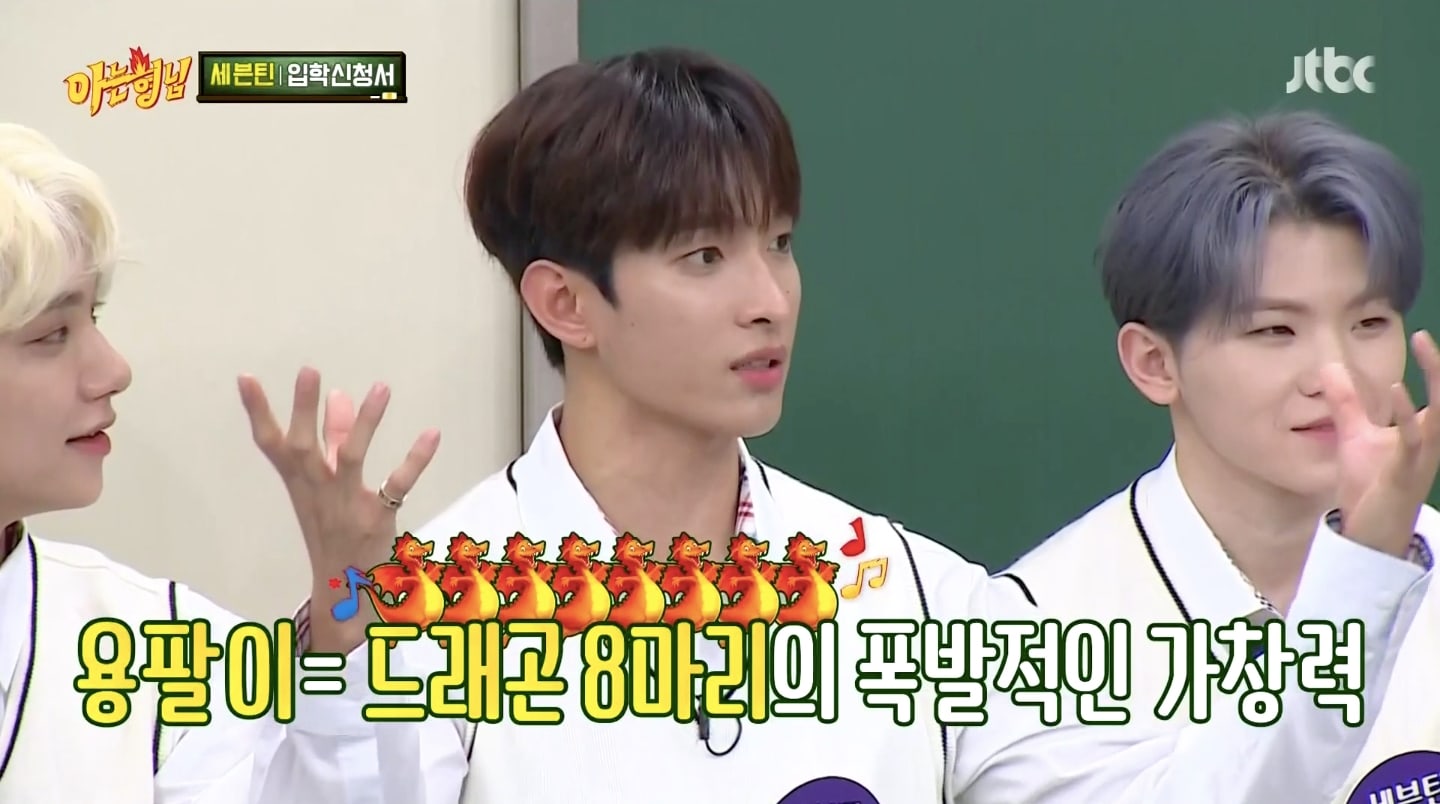 Later, during the program’s signature guessing-game segment, Joshua told the amusing story of how Hoshi had once shocked him by obtaining his home phone number without his knowledge, then going to Joshua’s home in LA without him for a home-cooked meal.

“This was during our North American tour,” explained Joshua. “My mom came to our concert, so we all greeted her then. Later on, I was having a meal and catching up with some friends when I suddenly got a text from my mom with a photo. She and Hoshi were having galbi [grilled ribs] at home.”

As everyone cracked up, Joshua continued, “So I looked at the photo, and it was my house. My mom was making galbi for Hoshi at home, and it was just the two of them.” 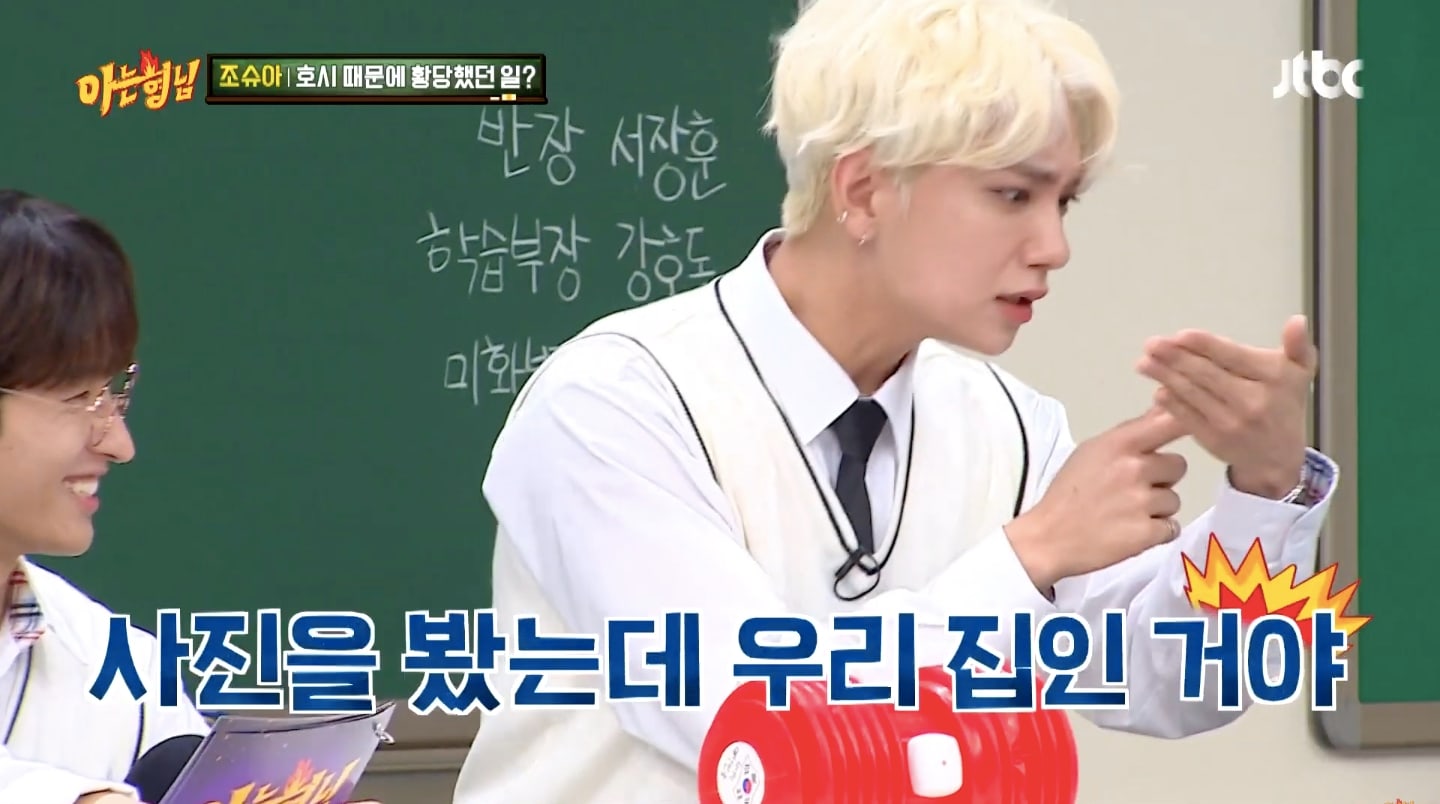 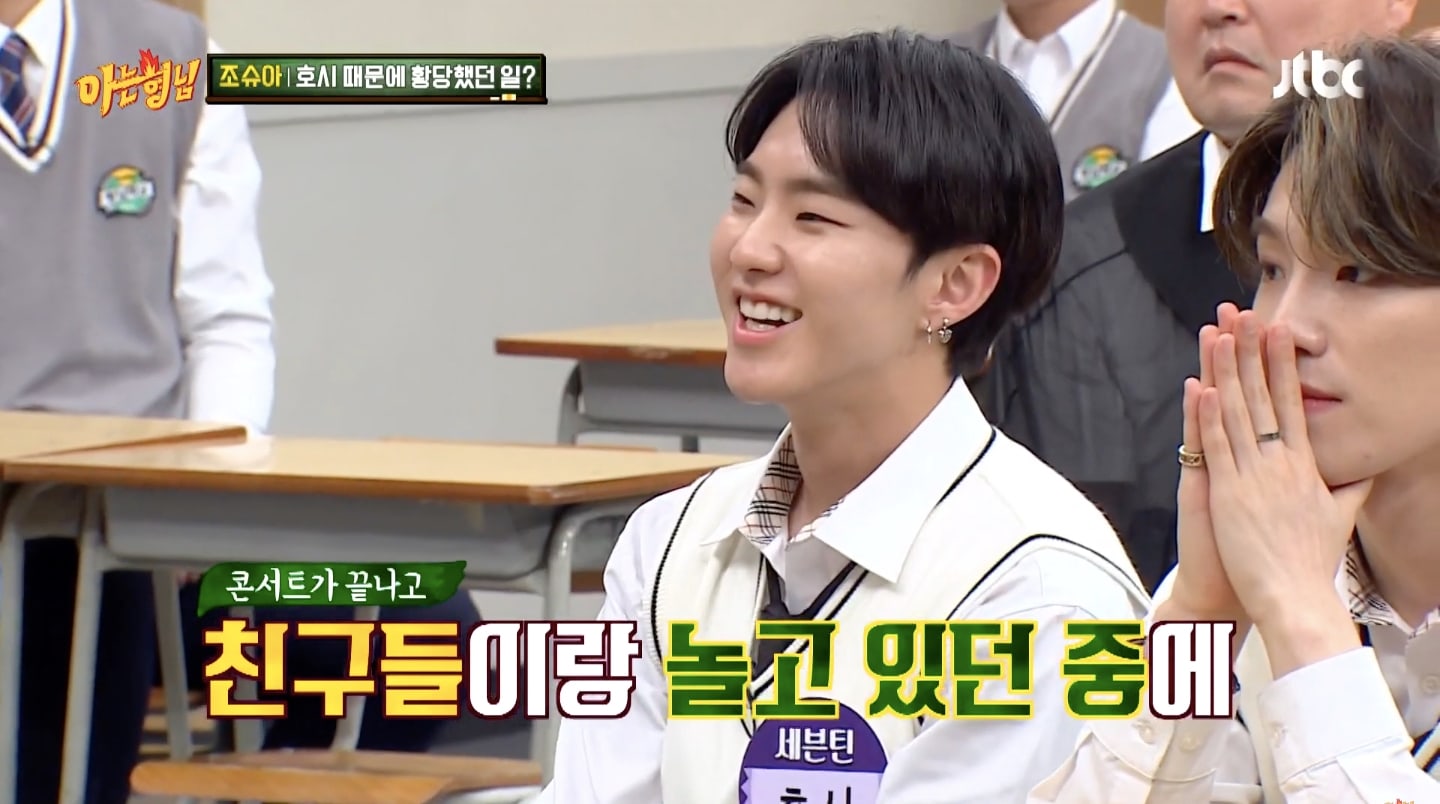 Jeonghan then pointed out, “The8 also recently had a meal and went fishing with Mingyu’s dad without telling Mingyu.”

The8 explained, “Mingyu’s parents take such good care of me. They even told me, ‘We’re your Korean mom and dad.’ So when I had some free time and Mingyu was out working, I didn’t have anything to do, and Mingyu’s dad suddenly came to mind. So I contacted him, and he told me, ‘If you’re bored, let’s go fishing together.’ So we went fishing.”

Mingyu recalled with a laugh, “What was funny about it was that at about 3 in the afternoon, I got hungry and asked The8, ‘Myungho [The8’s Korean name], what are you up to? Let’s grab some food together.’ And he said, ‘I already went out to eat with your dad earlier.’”

Kang Ho Dong commented in amazement, “It’s like you’re all one family,” and the SEVENTEEN members agreed, “We’re all close.” 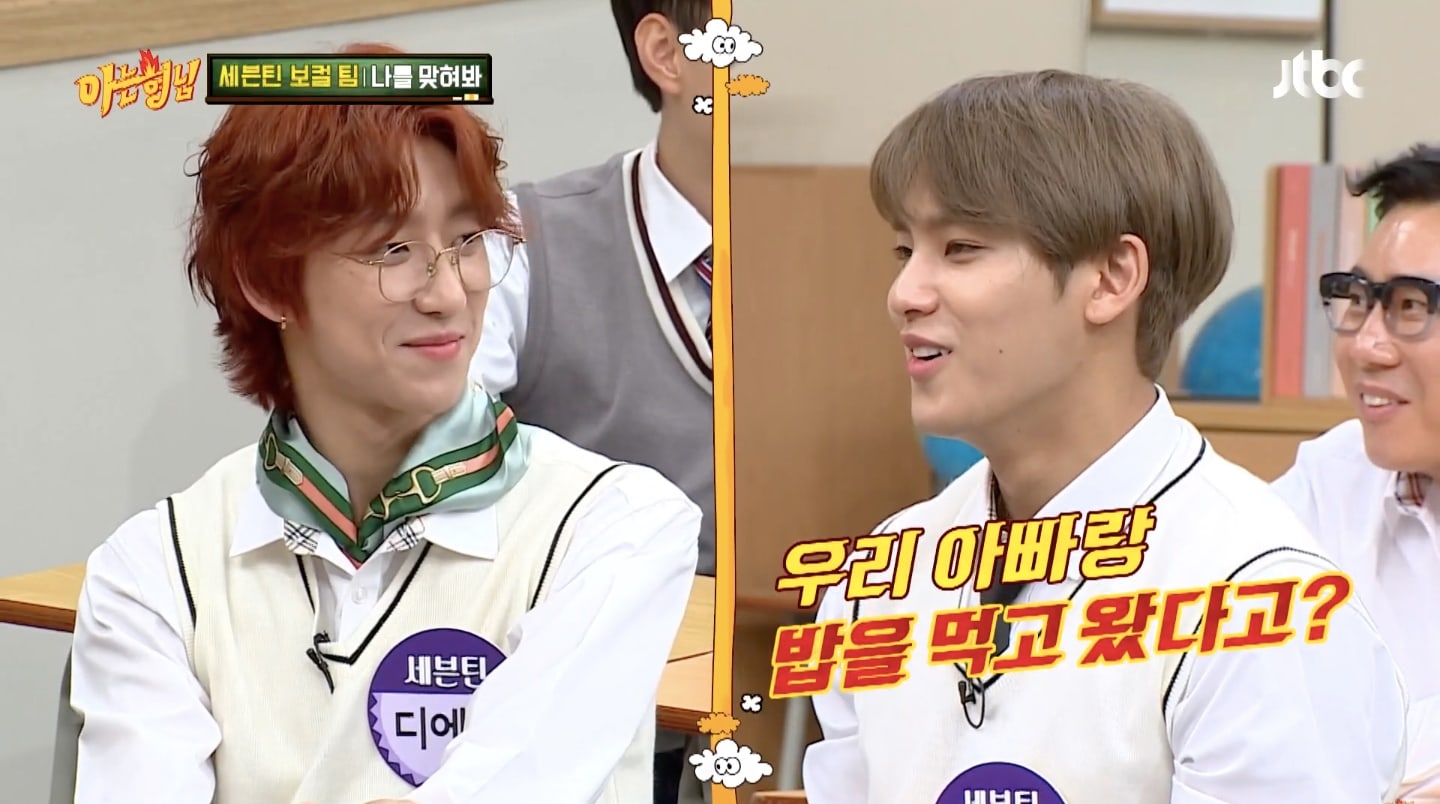 At another point in the episode, Joshua impressed the cast by showing off his ability to hold a handstand for extremely long periods of time—even while walking around on his hands.

After he had proven his skills, Lee Soo Geun suggested that Joshua and three of his bandmates perform an amusing comic skit in which all of them walked by the classroom window, with Joshua walking in a handstand so that only his feet would be visible.

Check out the clip of Joshua showing off his skills—and SEVENTEEN’s impromptu comedy skit—below!

Watch full episodes of “Ask Us Anything” with English subtitles here: