On November 3, YTN Star reported that a “Sponsor” production staff member had complained about an incident involving one of Lee Ji Hoon’s acquaintances on set. Lee Ji Hoon and the drama producers released statements apologizing for the incident and clarifying the details of what had occurred.

That same day, screenwriter Park Gye Hyung claimed that he and other staff members had been unilaterally fired as a result of Lee Ji Hoon complaining about his screen time. Both the drama production team and Lee Ji Hoon’s agency denied the allegations. A few days later, Lee Ji Hoon took to Instagram to share his side of the story and express frustration with the rumors and reports.

On November 8, “Sponsor” released a new statement, this time with screenshots of text messages from writer Park Gye Hyung and Lee Ji Hoon.

They stated, “First, we would like to clarify that various speculations regarding the production are different from the truth. It was in May that the production team first requested that writer Park Gye Hyung adjust the script to give the character more screen time. At that point, Lee Ji Hoon hadn’t even seen the script.”

To back up this point, the producers shared a screenshot of a text that Park Gye Hyung had sent them. In it, writer Park Gye Hyung wrote, “It’s painful for me to have to keep changing things all over. But it’s because we need to do well, right? The director has more experience than me, and I have to follow his lead well. I’ve fixed what I could, so it’s not that I’m fighting over things and just sending it back. It’s tiring and disappointing for me to have to continually correct things that I handed in over three weeks ago. But I’m doing my best to fix things here and there according to the director, who wants a more complete production. The director told me to fix about two scenes this time. I’m debating about it because there’s a difference in nuance between the two lead characters there. If the CEO [of the production company] gets mad, then I can’t do anything. Please don’t get mad and trust me. I can finish it within two days. There won’t be big changes, so I’ll send everything I’ve done up until episode 2 now. When you see the complete script, you’ll understand how I feel.”

The “Sponsor” producers continued, “In July, the production company, the director, and the writer had a meeting to discuss the script. At the time, the corrections regarding the character’s screen time still hadn’t been made. The messages that Lee Ji Hoon had exchanged with the director had been about the character’s set-up, and he promised to trust in the director and follow his lead. They did not talk about his screen time.”

Again, as proof, the producers shared screenshots of the messages sent between Lee Ji Hoon and the director at the time, Kwak Ki Won. Lee Ji Hoon wrote, “When we first spoke, you said that Seung Hoon [Goo Ja Sung’s character in the drama] had to die to make the story work, but if Seung Hoon doesn’t die, then will the drama’s story keep going in the direction of making makjang extramarital affairs the main focus?”

The director replied, “No, that’s not it. Right now, I’m in discussions with the writer about whether the overall storyline is heading in that direction. I’m seeking to make the characters’ actions and thoughts as believable and realistic as possible. I want to avoid an unrealistic makjang story, so don’t worry.”

Lee Ji Hoon then sent, “Sun Woo [his character in the drama] is the main character, but he doesn’t show up much for the first four episodes. I believed that Sun Woo’s narration would begin in episode 5 and Seung Hoon would die around episode 6 or 7. Sun Woo is a very justice-oriented character, and I haven’t done one like that before, so I really liked it. I have faith that you’ll bring him to life as the main character. I’ll trust in what you said then, director.” The director answered, “Yes, Sun Woo is a justice-oriented character.”

The “Sponsor” producers continued, “In August, there was a full meeting of the production team. This was when we decided that Park Gye Hyung would leave the project. At the time, in the scripts for episodes 1 to five, the character’s screen time was less than 10 scenes. The production company requested changes in the entire first half, but their requests were ignored. The director also left the project in September due to issues with the footage results. The director created a situation that didn’t take responsibility for the footage we needed and we requested that he leave.” 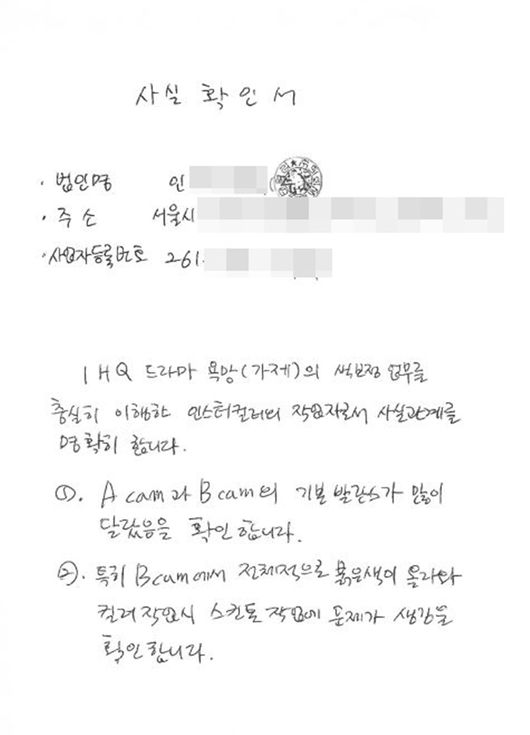 As evidence for this, the producers released a signed statement of fact received from the D.I editing room. The company in charge of the color correction of the footage declared that the issues in the footage were due to differences in the balance between the A camera and the B camera and improper maintenance of the B camera.

The “Sponsor” producers concluded, “We will say this as directly as possible. Lee Ji Hoon has no connection to the production staff members being replaced. Park Gye Hyung and the production company had been discussing the script changes since the start, and it is completely normal for the production company, directors, and writers to discuss changes to the script. Park Gye Hyung has invented this frame that makes it look like Lee Ji Hoon’s ‘power tripping’ was at fault, and we’re deeply disappointed at the situation that has resulted. The production company simply made the decisions that would result in a better production. It was absolutely not at the request of one actor. Once again, we state that the actor has no connection to these events and that these one-sided statements being made are false.”

As soon as we met, the director asked me, “You were surprised that Sun Woo hardly has any scenes even though he’s the main character, right?” and I said that I was. The director told me not to worry, that it would be fixed, that the second male lead, Seung Hoon, would die off in episode 5, and that Sun Woo’s storyline would increase. He said that he had everything in hand and not to worry.

I thought carefully about it, and since it was the production that first made me the offer, I decided to trust in the director. After some time, I received a modified script. But it turned out the director had lied. The scenes I had from episodes 1 to 4 were about the same. I had five scenes in episode five and six scenes in episode 6. Since the drama was 12 episodes long, I wondered, ‘What is this?’ I was a bit anxious, so I contacted the director to check again. Of course, from my perspective, I was worried. I’d seen the synopsis and heard from the director, but I had three or four scenes, six scenes at most, even though one episode is about 50 scenes total. I’ve seen a lot of scripts in my time, but I wondered if this was right. I asked the production company CEO if I could look at another project instead, but they said that the script would be fixed. When I received the new version, there were about two more scenes.

According to the synopsis, my character was the main character, but even after repeated corrections, I had eight scenes at most in a 50-scene episode. This was about two months before the first filming was set to begin. I’m sure that many people will agree with me that this was worth talking about with the production company. But does it make sense that three weeks before filming, they could suddenly say to me, “Why don’t you change roles to Seung Hoon instead?” Is this me power tripping against the director and writer? No matter how you look at it, the director and the writer were the ones who tricked me. The two of them can’t use me as a shield to fulfill their self-interests.

At some point, without me knowing about it, a strange recording was made of a conversation between the production company CEO and either the writer or the director. I hadn’t even signed a contract with the drama, no one else had been cast, so was I wrong for even considering other offers I’d received in the meantime? I think that I at least have the right to think about and choose the productions I want to work on. Don’t just reveal the script cover. The one you uploaded was the very last script I received from you. Show the first script I received, as well as the multiple revised versions. If you say that you don’t have them, then I’ll share all the versions that I saw and were shocked by.

Ah, there was also something said about Instagram, but I had an account that was hacked in 2019, so please confirm that first! Send a message! I still send my fans thank you messages at all hours of the day and night. I’ve also sent people I like messages, and I send a message about once a week to Mbappé [soccer player]. So what? A social networking service is a platform where you can build relationships, make unexpected friends, start romantic relationships, and receive cheers and support.

I don’t think that there is any more need to reply one by one to things about this issue. From now on, those who connect me to things that have nothing to do with me and upload recklessly malicious comments will have have no lenience from the law. I will only take action through the law from now on.

This last is for the fans who have shown such great love for me. I will take this time to mature and grow and greet you with a better image after correcting all the parts where I’ve been lacking. I think that this trying time will add more depth to my life, my acting, and my heart. Right now, the entire cast and crew are working hard filming together.

Chris Lake & Grimes to release ‘A Drug From God’ this Friday