Watch: Park Hyung Sik, Han Hyo Joo, And Jo Woo Jin Talk About Their Chemistry Behind The Scenes Of “Happiness”

The main cast of TVING’s new original drama “Happiness” spoke about their teamwork and enjoyed moments of laughter behind the scenes of the drama!

Set in the near future, “Happiness” is an apocalyptic urban thriller that takes place in an apartment that is stratified by social standing. The high-rise apartment is sealed off when a new infectious disease emerges, and the drama depicts the fear, psychological battles, and desperate struggles for survival that ensue.

The video begins with Han Hyo Joo, who plays tactical agent Yoon Sae Bom. On working with her co-star Park Hyung Sik, she says, “I met him for the first time through this drama. He’s very considerate and has good teamwork that matches with the characters in the drama, so I’m very grateful to have met a co-star like him.”

She then comments that Jo Woo Jin is an actor she’s always wanted to work with, adding, “I think there’s a sort of happiness that comes from acting together with him, so I’m really looking forward to it.”

Next up, Park Hyung Sik, who stars as detective Jung Yi Hyun, also shares his thoughts on working with his co-stars as he says, “After filming together with Han Hyo Joo, I’ve realized we’re similar to each other in many ways, so we communicate well and laugh a lot while filming. Jo Woo Jin is also quite the jokester, so I really look forward to days when we film together and what kind of stories he’s going to tell.”

Jo Woo Jin, who plays the charismatic Han Tae Suk, remarks that both Han Hyo Joo and Park Hyung Sik are comfortable to be around and fun to work with. He continues, “There’s plenty of scenes left where we display our chemistry, so I’m looking forward to spending even more happy moments together.”

The next clip shows Park Hyung Sik and Han Hyo Joo as they joke about her bright white clothes reflecting the sunlight, which she claims she prepared specifically for him. They also stretch together in between takes, but when Han Hyo Joo presses her hands together in an angelic pose, Park Hyung Sik pretends to take a picture as he says, “The time is now!” Han Hyo Joo also begs him to walk in a “cool” way, to which Park Hyung Sik teasingly responds, “I don’t know how to walk cool!” 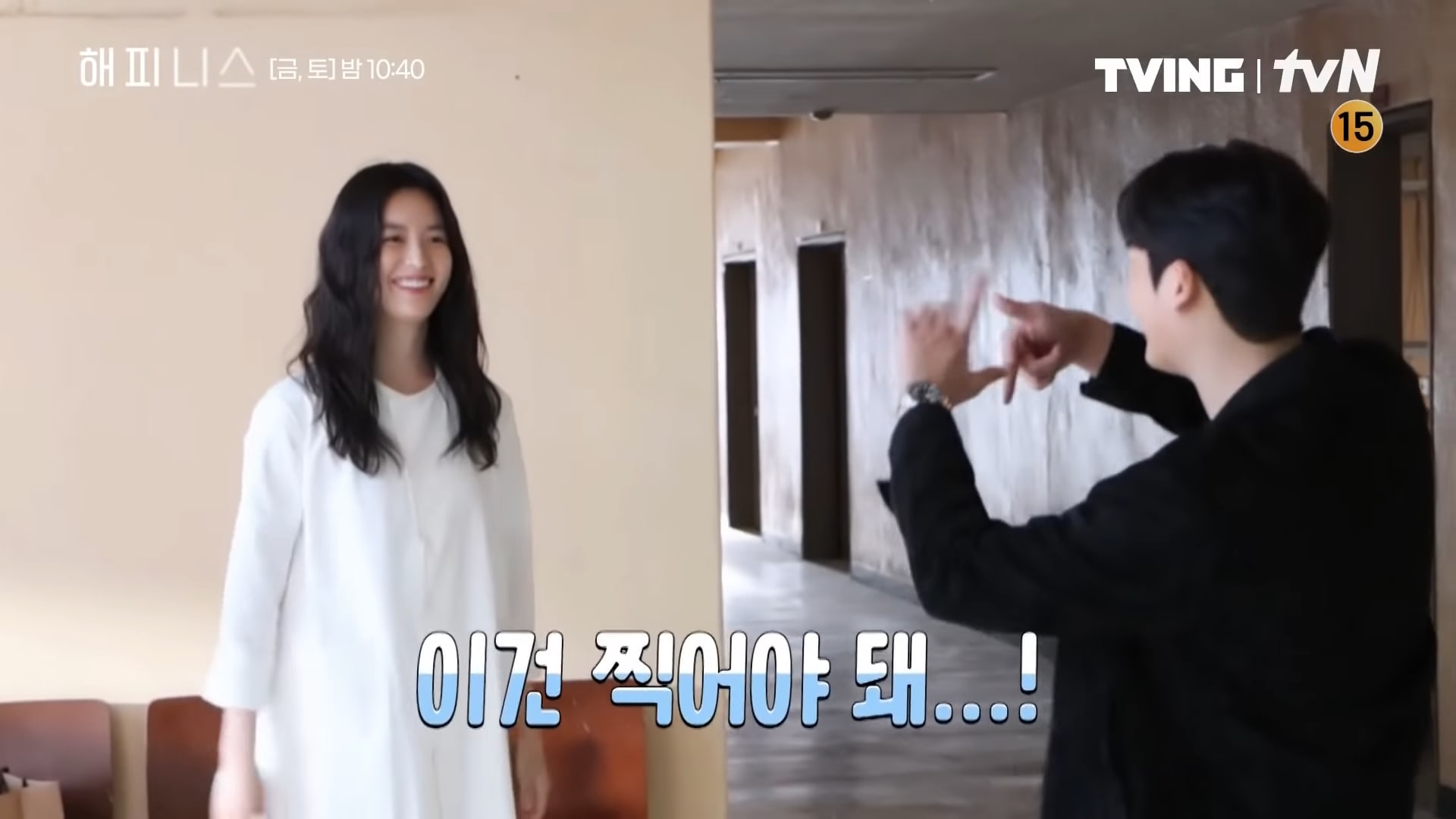 In another clip, Jo Woo Jin spies the camera and says dryly to Park Hyung Sik, “Oh, it’s for the making-of film. Do something.” After telling Park Hyung Sik to pretend to be exhausted, he plays along by holding up the props in his hands and saying, “Do you know how hard it was holding these in my hands and driving at the same time?” The conversation then turns to the staircase they’re standing on as they discuss how difficult it is to go up the stairs. Park Hyung Sik expresses his worry that Jo Woo Jin might fall over in a lighthearted manner, bringing a smile to the other actor’s face.

The making-of video comes to an end as the trio ask the viewers to share lots of love and support for the drama.

Check out the full video below!

Start watching the drama with subtitles below: